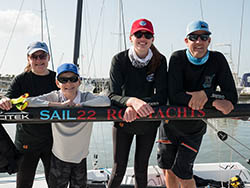 If there has been one constant about Sperry Charleston Race Week over the years it’s the family dynamic that has become a hallmark of the regatta.

The event and venue, with all the onshore fun, that attracts sailors to combine high-level racing with quality family time.

As usual, there are plenty of family programs competing in Sperry Charleston Race Week 2018. In fact, family members comprise the entire crew of the J/70 Old School with Brandon Flack sailing with his wife, 15-year-old daughter and 13-year-old son.

“It couldn’t be better when you can mix sailing at a great regatta like this and being with your family,”Flack said. “I was so psyched coming down here because I couldn’t imagine a more fun thing to do.”

The Flack family hails from Stonington, Connecticut, where they regularly race in the Melges 24 fleet. They travel to major regattas to compete in the J/70 class and Brandon borrows a friend’s boat for Sperry Charleston Race Week.

“We’ve been sailing the J/70 for almost five years as a family team so we’ve kind of grown up with the boat,” he said.

Lily Flack, an accomplished Club 420 sailor who also races a Melges 24 with the MudRatz youth team, steers the boat upwind. Dylan Flack, described by his father as a retired Optimist racer, is a “gentleman” sailor who only likes to drive downwind. Brandon trims the headsails and keeps the middle sorted while Cindy works the bow.

“We just piece it together and have a blast,” Brandon said. “Sometimes we have good races and sometimes we have bad ones. I’d rather have a bad race with these guys than with a bunch of rock stars.”

While Brandon Flack may be listed as skipper on the scratch sheet, he made it clear that his wife is really the one in charge. “Cindy makes all the big decisions. She keeps us all on point,” said Brandon, a marine manufacturer’s representative for Samson Rope, Musto foul weather gear and Torqeedo outboard motors among other products.

For instance, Cindy declared that Old School would skip the third race on Thursday when the wind gusted into the mid-teens. Nobody had a problem with that call as the family spent the rest of the afternoon relaxing by the pool. Nights are spent hanging out and hosting friends in the recreation vehicle the family has parked just outside the Charleston Harbor Marina and Resort.

Serious sailboat racing can get crazy at times and Brandon Flack admitted that it’s not all smiles and niceties onboard. At stressful times there can be yelling and harsh words exchanged.

“It’s not easy. There are moments when we think we might need to call social services. There are definitely some family dynamics onboard,” Brandon said with a laugh.

Spaceman Spiff has been a family-based program for years now as Rob and Abby Ruhlman brought their two children aboard as crew when both were young. Ryan and Maegan Ruhlman are all grown up with families of their own now, but the family team continues. Rob steers and Abby works the pit while Ryan has developed into a top-notch tactician and Maegan Cross does a superb job of trimming the main. Ryan’s wife Tesse has joined the crew as jib trimmer while bowman Doug Moose is jokingly referred to as a “cousin.”

“We’re just real fortunate to be able to sail together as a family,” Rob Ruhlman said. “Abby and I have been sailing together for more than 40 years. Ryan and Maegan grew up racing on big boats. I brought Abby into sailing just like Ryan has brought his wife into it.” While the Ruhlman family hails from Cleveland, Ohio it has a strong connection to Charleston. Ryan and Maegan both attended the College of Charleston and were members of the sailing team.

“We all have a lot of friends here so we really enjoy coming back each year,” Rob said. 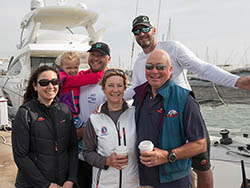 Rob Ruhlman was proud that Spaceman Spiff passed four boats during the final downwind leg and wound up finishing third in Race 7.

“I think this crew does a great job of staying focused and keeping their heads in the game,” said Rob, who also steered Spaceman Spiff to victory in Race 2 and third place overall in J/88 class.

The whole Ruhlman family, which now includes some grandchildren for Rob and Abby, is staying at The Cottages on Charleston Harbor – turning this regatta into a family vacation. After so many years of racing together, the communication on Spaceman Spiff is extremely strong.

“We really do have good chemistry aboard the boat. We’re intense competitors, but we’re pretty relaxed about it,” Rob said. “I think because we’re family we’re all sort of pulling the same direction, which makes things a little easier.”

There are too many other examples of family-oriented programs at Sperry Charleston Race Week to mention them all. Teamwork, the J/122 that is the only four-time winner of the prestigious Palmetto Trophy, is led by skipper Robin Team and includes his brother Adam and sons Alston and Coleman.

Terminally Pretty, winner of the Viper 640 class, is sailed by the husband-wife team of Geoff and Mary Ewenson. Another married couple, Greg and Jo Ann Fisher, took third in VX One Class aboard Reciprocity.

“Jo Ann and I started sailing before we got married so it’s been about 18 years now. We went to a Flying Scot Midwinters and had a great time together. I don’t think I’ve done a big regatta since then without her,” said Greg Fisher, Director of Sailing for the College of Charleston. “I wouldn’t want to sail without my wife. We always have a lot of fun. We have some tense moments on occasions, but we always leave it on the boat.” 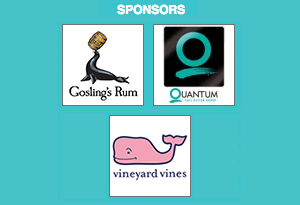